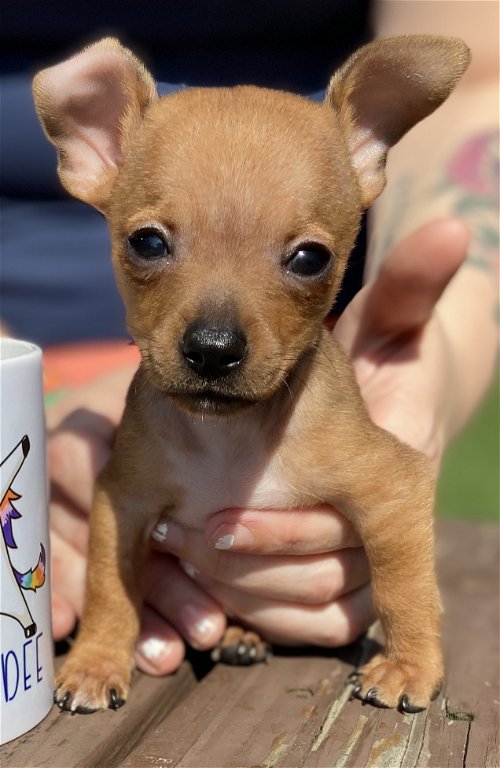 Elliott is a wee tiny Chihuahua mix that came to us all the way from the big state of Texas! We were contacted by a rescue coodinator about a puppy that the "breeder" suspected was blind and possibly hydrocephalic. We've never transported a dog from so far away before, but the situation sounded dire and we couldn't say no to this potentially sick puppy. So, little Elliott took a big journey north with a wonderful flight attendent who uses his free miles to transport animals in need.

Immediately upon taking Elliott in, we could tell that he was fully visual, and didn't appear to be hydrocephalic either. We took him straight from the airport to our vet's office, who confirmed that he is perfect! We have NO idea what gave the "breeder" the idea that he had medical issues, but we're thrilled that he's a normal, happy little puppy, and is out of a bad situation and will be placed in a wonderful forever home!

Here's what his foster mom has to say about him, "Elliott is about as sweet as they come! He has typical puppy energy, but also likes to cuddle in your lap. (He's pretty vocal about letting you know when it's cuddle time!) He enjoys tormenting his doggie foster sister with puppy antics, so other dogs would be great, but he has just as much fun on his own or with his people. He's working on puppy pad training and understands corrections. His crate isn't his favorite place, but he settles in quickly. He really enjoys going outside and chasing leaves and romping around in the grass!"

Elliott is a SMALL puppy, and we mean SMALL. He was only 1.2 lbs when we first took him in in early September, and at his last vet appointment he was a whopping 2.5 lbs, haha! We don't think he'll get much bigger than 8-10lbs as an adult. He's supposed to be a Chihuahua, but as he gets older, he's getting longer and not much taller, so we suspect that he may have some Dachshund in his breed mix too. Elliott is current on his puppy vaccine series, has been dewormed, is on monthly preventatives, and is microchipped. He will be adopted out on a strict neuter contract, as he is still too small to safely undergo the surgery at this time. (This is included in his adoption fee.) We guesstimate that he's currently around 12 weeks old.

In typical Chihuahua fashion, Elliott is a sweet and sassy little dude! He adores people and other animals, and we'd love to see him have a size appropriate doggie friend in his forever home, but this isn't a requirement. He's never met a cat, but we can't imagine he would have any real issues living with one.

Because of his diminutive stature, we will not place Elliott in a home with large dogs or young children.

Please click here to submit an adoption application for Elliott! If you have any questions, please don't hesitate to contact us at newleashrescue@gmail.com.

Good with Dogs, Good with Kids
Videos of Elliott:

Other Pictures of Elliott (click to see larger version):